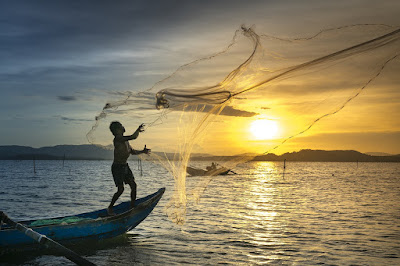 Last Sunday, at our united service at St Michael’s, we joined together with other Christians from Amersham on the Hill to worship, pray and listen to God’s Word.

I used to sing a song about that in Sunday School!

As the sermon progressed, he shared with us this lovely and inspiring thought that Jesus might have used the ‘fishing’ image precisely, and specifically, because he was talking to fishermen – simple and obvious really!  In describing the work of The Kingdom, and his invitation for them to join with him in spreading a message of love and light, he referred to such work as ‘fishing’ – of course he did, because, as always Jesus is conscious of his audience.

The idea, preached by my Methodist friend, was that if Jesus had been speaking to carpenters might his invitation have been; Follow me and I will make you ‘builders’ of The Kingdom. Or, if he had been addressing doctors could he have issued a challenge that they become ‘healers’ of The Kingdom?

I’m not sure what that means if you are a computer programmer today, maybe Jesus’ invitation is: Follow me and let’s build a new website for living.

The point is that this call to serve isn’t about lamenting the skills we don’t have but embracing the ones we do.  It’s about using those gifts, talents, personality and interests, and offering them to up God.

Are we willing to give God our whole selves in response to the call: Come, follow me? 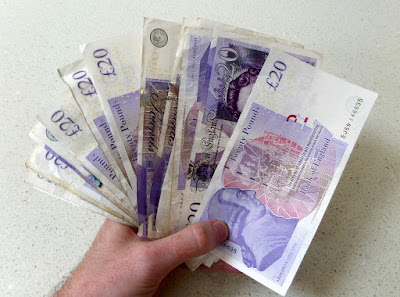 I was struck by a piece tucked away in The Times last week.  It’s a story that merited no more than four paragraphs, yet it’s a tale all about the infectious power of kindness.

Apparently, after receiving some help from a resident of Blackhall Colliery in Co Durham, an anonymous ‘donor’ has, over a period of  five years, left packets of £20 notes in the streets as a way of saying ‘thank you’.  Each packet contained £2,000 and, perhaps surprisingly, every single packet once picked up has been taken to the Police Station.

The anonymous donor said, as a result of receiving an act of kindness from a person living in the town they felt a ‘connection’ with the place and wanted to ‘repay that kindness’.

It has elements of the story of Zacchaeus in the New Testament as he ‘paid back’ all he owed to the residents of Jericho, plus ‘interest’!

Before we all book our holidays to Blackhall Colliery in the hope of coming by an unmarked package, The Times rather gave the impression that this way of doing things had now come to an end!

Yet, isn’t it interesting how kindness touches us, it’s a powerful force; and gratitude motivates us.  Having been touched by kindness it sort of becomes infectious and we want to pass it on.

Perhaps the people of Blackhall Colliery have given us a story worthy of being considered a modern-day Parable.
at January 23, 2020 No comments:

View from the Pew week 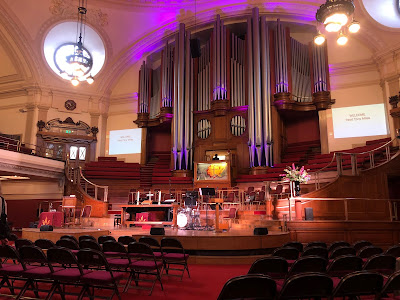 Once a month, at the moment, I'm having a 'Sabbatical Sunday', visiting other churches and then writing it up on the 'sister' website to this.

https://viewfromthepewsabbatical.blogspot.com/
at January 17, 2020 No comments: 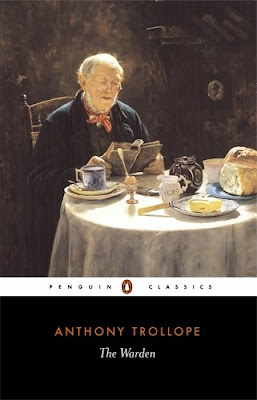 Over Christmas and New Year I enjoyed reading Trollop’s The Warden. A tale of the ‘goings on’ in the early Victorian Cathedral city of Barchester.  A young ‘reformer’ is keen that the allowances made under the provision of Hiram’s Will should be reallocated so that the alms house Warden receives considerably less and the ‘inmates’ considerably more.  The book is full of ecclesiastical intrigue that I find unnervingly familiar!

At one point the rather ardent reformer has a change of heart and tries, unsuccessfully, to convince the editor of a national newspaper that he should no longer support the campaign.  On his way back home the now reluctant reformer passes a bookseller’s window and sees a new, thin book on display, one authored by a renowned and revered national commentator and thinker.  He laments that the really ‘big’ issues of the day were once discussed in big books.  Yet now, with people more impatient and not prepared to read as much, such issues are discussed in much smaller books.

Roll the tape forward and we might say it went as follows: bigger books, smaller books, pamphlets, newspapers articles and, in our own day, ‘soundbites’. I even heard it said on Radio 4 the other day that unless a politician can sum up their message in something no longer than a ten word sentence they might as well shut up shop!  Commentators tell us the recent General Election was won on just three words: Get Brexit done!  Our friend from Barchester would  have been horrified at how our attention spans have shrunk in the last hundred and fifty years.

In terms of faith and belief perhaps the Bible has played its part in promoting moments when an epiphany (revelation) dawns without too much detail or debate.  Moses had such moments at the Burning Bush and on Mount Sinai, as did Paul on the road to Damascus.

Yet such instant Epiphanies don’t seem to be the norm for most of us.  I suspect we, usually, experience much slower ones.

Faith comes with doubts, questions, longings and false starts, yet none of these invalidate the journey, indeed they probably deepen it.

When I say The Creed at Evensong (normally when visiting a Cathedral) I sense it contains a series of ‘soundbites’ stitched together.  Facing East I join with others in affirming a belief in, amongst other things: the Virgin Birth, the Holy Catholic Church and the idea that in between his death and resurrection Jesus descended into hell.  Without pausing we move from one big theme to another, each worthy of a book in Barchester!

I confess I’m tired of the ‘soundbite’.

When it comes to faith I suspect I believe the deepest Epiphanies come not on the road to Damascus, but sitting on a camel, travelling for months, if not years over moor and mountain slowly, yet purposely, following the light of yonder star. 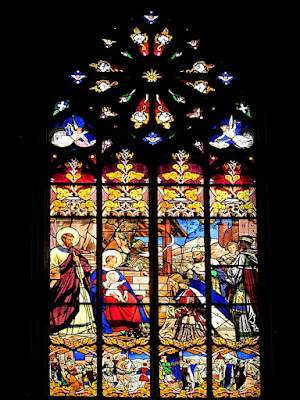 January 6th, the twelfth day of Christmas, and it’s last, is also Epiphany.  For a final moment, that links us with the old year, we gather once more around the manger.

The Wise Men were ‘Magi’, which means we actually don’t know too much about them or who they really were.  Theirs’s seems to be a myth narrative all about ‘Seekers after Truth’ who were prepared to travel many miles to honour and worship a ‘King’ like embodiment of the Wisdom of the Ages and the Hope for the Future.

Going to a palace to find such a leader was perhaps understandable and fitted in with the much tried and, yet, much failed ‘paradigms’ that filled the past chapters of history.

Of course, the point of the story is that such an old way of thinking, with leadership solely defined by a sense of power and single-nation identity, is flawed and fruitless.  The Wise Men talk to Herod, a puppet King, and find in him the epitome of monarchical insecurity, madly jealous of anyone who might be more popular than him.

Nevertheless, these Wise Men had become Herod’s temporary friends and confidants.  They accepted his hospitality, and by involving him in their quest they had inadvertently formed a poisonous alliance with a megalomaniac.
This was a potential moment of compromise for our Wise Men, who seemed to have taken their eyes off the star.  Their challenge now was to cast off Herod’s grasp and regain once more their independence.

They called him Herod the Fox for a reason.  He wanted to ensnare the Wise Men by seemingly being in favour, if not supportive, of their mission.  Asking that they call by again on their way home and tell him where they had found Jesus.  It was a cunning plan!

Instead our travellers from the East find the baby, offer their gifts in worship, and return home by another route, deliberately keeping Herod in the dark and thus protecting the Infant King.

There will be many calls upon us in 2020, may we, as Seekers after Truth, value and protect truth wherever we find it in this New Year.