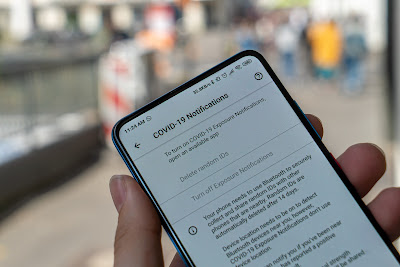 The last week has been somewhat unusual at The Manse as both of us have had Covid.  Maybe, because I’m married to a teacher, it was inevitable.  Once the symptoms appear (in my case a high temperature and cough), and having posted off the PCR test, it’s a surreal moment to be pinged, in the middle of the night, by the NHS with the positive result.  You look twice to make sure it’s your name on the communication, an electronic missive that tells you about the legally binding isolation which is now in front of you.


Over these days we have both become grateful for the many ‘little’ encouragements which have smoothed our path.  Everything from supportive messages of goodwill to one son’s girlfriend picking up the dog walking!  And I was touched that Erna offered to read my sermon last Sunday – it was an unusual experience to tune in to the recording and hear your own words spoken by a colleague – and spoken very well I may say!!

I was intrigued to hear the other day that if we collected all the Covid virus up, that is now prevalent throughout the world, it would fill just half of a can of Coca Cola!  Amazing that something so little has blighted so much of the last two years.  Wonderful too, that those two trips I made to a pharmacy in Northwood to have the injections have personally meant that come the time when I had Covid my inconvenience was just for a mere ten days.  I am profoundly grateful to those scientists who developed the vaccine, and I’m thrilled that at AFC we can show our gratitude through the October Mission Offering as we support raising funds for Developing World inoculations.
at October 15, 2021 No comments:

I’ve been struck by two very different images this. 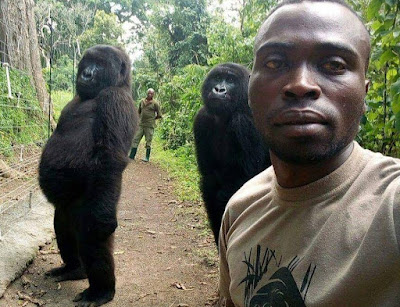 One is of a gorilla, photo bombing someone taking a selfie.  She is Ndakasi, a mountain gorilla and she is sharing the moment with one of her friends at the gorilla orphanage in Virungo, Africa’s oldest national park located in the Congo.

Ndakasi died this week, aged 14 years, in the arms of the ranger, Andre Bauma, who rescued her back in 2007 when she was just two months old.  He parents had been shot dead by poachers and ever since the ranger, Bauma and the gorilla, Ndakasi have had something which seems like a father and daughter bond.

It’s a charming photo.  This adopted gorilla is doing her best, we are told, to imitate the man taking the selfie.

Those two words: adoption and imitation, are ones we often use when it comes to faith.  We are, as it were, ‘adopted’ by a loving and welcoming God as his beloved.  We then spend a lifetime of discipleship seeking to imitate the example left us by The Lord Jesus Christ.  We want our lives, in some small way, to reflect His.

Well, if Ndakasi looks statuesque in this photo my second image is actually a statue.  A statue of Julius Caesar. 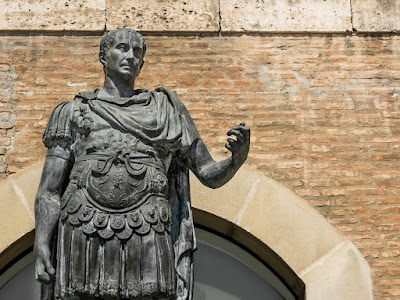 I was listening to the engaging historian, Dr Mary Beard on the radio introduce her new book detailing the lives of the first dozen Caesars.  She mentioned that the Romans occasionally changed the heads on their statues.  So, if a Caesar’s reputation went down hill after the statue was erected, as it did in the case of both Nero and Caligula, rather than throw the statue in the river, the Romans simply pulled off that head and put another one on instead.  An early example of re-cycling!  So, Julius Caesar’s head was put on a statue of Alexander the Great.  One reputation on the way up, the other on the way down.

In fact the Romans had an official way of re-defining someone’s memory and it was called Damnation Memoriae.  It needed a vote in the Senate, and it effectively ‘corrected’ their image by taking them down a peg or two.  This happened to no less than 26 emperors; however, we must also be aware that the Senate deified another 25!

One of the problems we seem to be having with statues is accommodating the notion that all human beings are blended characters of the good and the bad.  Whilst we understandably want to re-evaluate whether people from the past deserve a place of honour, the truth is that statues, if they are of people, will inevitably be of flawed individuals.  And just changing their heads, as the Romans did, is not really a practical option in the current debate.

This leads me to rejoicing that in real life, before we immortalise anyone in stone, all of us are capable of change.  Indeed, it’s a mark of our maturity that we continue to grow, expand our understanding, and broaden our horizons.  We are a work in progress, not yet the finished article.  God and I know my faults, and by His grace, we are working on them together.  At least it’s one way to keep you head!

How do you spell that? 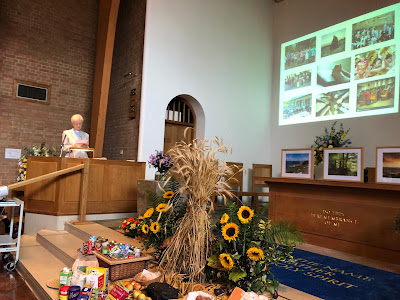 Sunday’s Harvest Festival was fun!  It was a real delight to welcome families and children along to the Worship Together service and then have so many people take part.  The Chiltern Food Bank has written thanking us for some 86kg worth of food, and so far we’ve raised around £500 for Operation Agri.
So, it was a shame about the preacher – me!!  There I was doing a ‘spelling game’ up the front trying to get other words out of the word Creation.  I thought I survived till the car journey home when Rachel looked at me smiling and said, you know you can’t get ENTIRE out of CREATION – it’s got two e’s!  To have made that mistake so publicly is quite an embarrassment, even if I did admit to everyone at the start of the talk that I’ve always been bad speller.  Well, Q.E.D!

At moments like these I’m grateful for a generous and forgiving congregation.  In fact, I thought the whole atmosphere on Sunday, from listening to Diane’s insightful presentation on the Foodbank to watching that wonderful Junior Church video about our church shrubbery, from being led in the visual prayers by Erna to the strong lead offered us by the music group as we sang, was all about being a ‘family’ at worship, accepting each other’s offerings with gratitude.

So, in making my spelling mistake – I’m glad it was at AFC amongst good hearted friends.

See you next weak….I mean week! 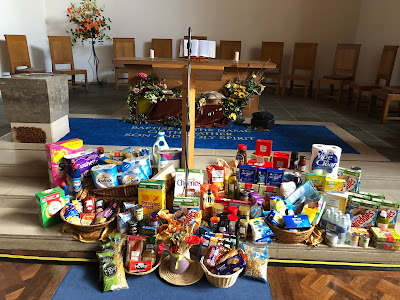 Well, as I write this Blog the sun is shining; perhaps far more than it did in August!  Yet, there is no doubt we are once again on the cusp of the seasons changing.
Now the Autumn Equinox of Wednesday is behind us we begin that inevitable march to the year’s end.

It's significant that in church services and private prayer we often mark these ‘on the cusp’ moments.  In the Monastic offices of the day, Lauds is said as the dawn breaks and Vespers is prayed at dusk.  And this weekend at AFC we hold our Harvest Festival which, to me at least, is an annual marker that summer is over and the autumn beginning.

As I ponder all this it strikes me that in observing these ‘transitional’ moments we are re-affirming our faith in the God who has walked with us in the past and promises to take us in coming days.  Life has a momentum which is unstoppable, and our moments are usually anything but truly ‘settled’.  In a way, as we emerge from the Pandemic, gradually and cautiously, we are once again in another ‘on the cusp’ phase.

The hymn we often sing at New Year has a refrain that seems equally appropriate as the seasons change: So, it’s from the old we travel to the new, keep me travelling along with you…
at September 24, 2021 No comments:

The Life behind the Words 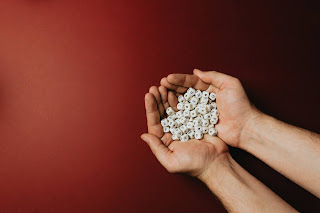 This week it was my privilege to officiate at the funeral of a father of an AFC member. The tributes given in honour of this ‘gentle-man’ were touching and one has lingered with me. He would often encourage the family with the single word ‘steady’.  I am sure it would have been said when they were facing a complex decision or needed strength and courage to take certain actions.  Well, his grandson said in tribute to him, that now he often says that word to himself, ‘steady’, when he’s up against it.  The influence of his beloved grandpa lives on.
It does in my own life too. For my grandfather would often say ‘life isn’t a rehearsal’, meaning everyday was the ‘real thing’ and needs to be lived with energy and determination.  I often think of that, as I often think of him.

The point, I think, is this: we recall these words and phrases because they were matched with a life that authenticates them. Both the words and the life speak and validate each other.

I sense it is the same with the Lord Jesus Christ. His words speak truth to us and guide us, and his life inspires and motivates us.  The gospels brilliantly contain not just the SAYINGS of Jesus but also His STORY.  We are the beneficiaries of both. 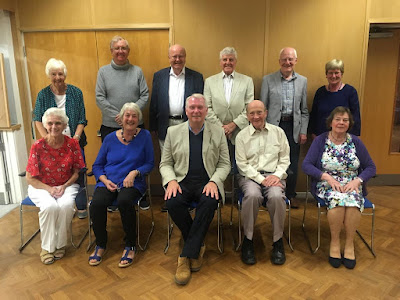 When Less is More 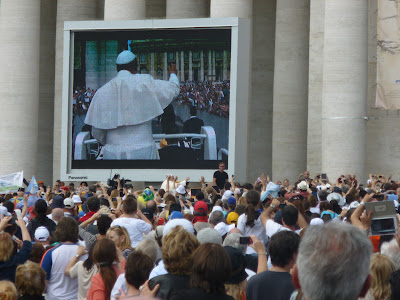 
There is a story doing the rounds that comes from the Conclave, the one convened in 2013, to elect the Pope.

Although all this happened behind closed, even locked doors, the Cardinals, apparently, asked three or four of their number (the front runners) to address them in the Sistine Chapel and speak about the vision for the Church’s future.  Obviously, this was the opportunity of a lifetime, and they all over ran their allotted time.  They tried to say everything and in doing so somewhat tested the patience of their audience.  Apart from one man, Argentina’s Jorge Bergoglio.  He spoke for less than his allotted time, so maybe it was his brevity that earnt him the papacy, for it was he who became the new Pope, Pope Francis.

Over these last 18 months, since we last had a Bite Sized Service in February 2020 to celebrate Epiphany, many things have been left out of our lives.  Meeting up, contact, hugging, shaking hands, seeing one another face to face.

We’ve discovered the value of less.  We, who have, relatively speaking, been so used to more, have felt the significance of the changing seasons, have been uplifted by a kind word spoken on a telephone call, have been thrilled to come back to a church service even if it meant wearing a mask and not singing.  Less has become more and the worth of the ‘ordinary’ has made a new impression on us.

Chatting to a neighbour in Lockdown, he said to me it wasn’t the expensive cruises he’d missed the most, but driving over to Cambridge to be with the grandchildren.

We’ve been recalibrating our values and it’s not the number of our words, or the monetary value of our gifts that matter most, but the spirit of open generosity in which they are given that truly blesses people around us.

So, we’ve missed you.  We missed LunchBreak.

This re-start isn’t quite the old LunchBreak, yet in a way less is more.  Because even though we might miss the food, what we value most is the fellowship.
at September 09, 2021 No comments:

The last week has been somewhat unusual at The Manse as both of us have had Covid.   Maybe, because I’m married to a teacher, it was inevi...