This week I sat in on our Partnership in Mission Committee as the issue of our Communion Offerings was discussed. It’s this committee’s responsibility to nominate the various charities we support on a monthly basis – and this forms an important part of our church’s ‘Mission Giving’.  I found it fascinating to look at the briefing papers and see the various organisations we’ve given to in recent years.  These are often small charities supported by our members and recommended by them.  On average we give to both the ‘parent’ denominations of our church, Christian Aid, eleven organisations through the Communion Offering and to three further charities through our Christmas Offerings.  All of that added up, last year, to just under £20,000 worth of support.

I want to suggest that this represents exemplary commitment by our congregation that flies in the face of what they call ‘compassion fatigue’.

In my experience churches are full of people whose faith and conviction makes them into communities of consistent generosity.
A few years ago I was at a Ministers’ Meeting addressed by our local MP who also happened to be a cabinet minister.  He arrived late having been detained at 10 Downing Street by the Prime Minister.  A little group of them had been called together following the announcement that the government believed in ‘The Big Society’.  This small cabinet group was being asked: what could the ‘Big Society’ look like?  It was a somewhat astonishing insight into the process of government policy: announce it first and work out what it really means afterwards!

Well our Ministers’ Meeting was in no such doubt as to what a ‘Big Society’ looks like – and we told the cabinet minister that we all stood in front of one every week!  For we stand before groups of worshippers who volunteer in both church and society, who have deep pockets of generosity and who embrace new projects with remarkable enthusiasm considering the routine commitments they already regularly maintain.  And part of this is represented by all those Communion Offerings we were discussing on Tuesday morning – as well as the 193 jobs/tasks that need doing in our church and are not only listed in our current directory but actually have names of people beside every one – volunteers who regularly step up to the mark.

‘Community’ is, I believe, a central theme in Christianity – and when it comes to the idea of the ‘Big Society’ I’m thrilled to say that in my experience churches really do ‘practice what they preach’! 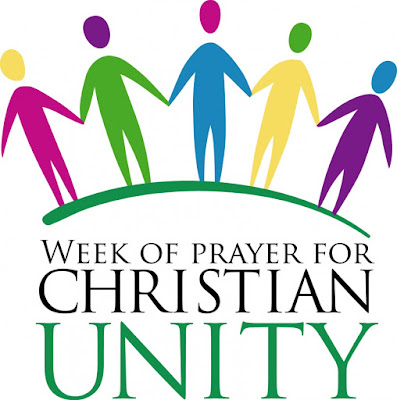 After Christmas and Epiphany, just as we start allowing ourselves to get a touch excited about longer days, we bump into the Week of Prayer for Christian Unity.  It started today, 18th January and runs through until the 25th of this month.

To celebrate this Week of Prayer we’re holding a united service between the three town centre churches of Amersham on the Hill this coming Sunday at St John’s Methodist Church.

I was interested to learn that Amersham Free Church, set up as intentionally ecumenical with the Baptist and Congregational Unions as its original parent bodies, came into being in 1907 closely followed by The Week of Prayer that was first held in January 1908.

One of my first experiences came during my ordination training.  I was invited to be the Evensong preacher at a rather grand parish church.  The Rector and I met up thirty minutes before the service to walk me through the logistics.  I admit I was nervous as taking part in processions isn’t something we Baptists do very often.  ‘You sit there’ – he said, pointing to a chair one side of the altar.


Well, I processed in behind the choir, but when I got to the chancel the chair, previously pointed out to me, had been removed!  What was I to do and where was I to sit?

To my embarrassment my next move wasn’t the smartest in my life.  In full view of giggling choir boys, I tried moving a seat the other side of the altar to the place originally pointed out to me.

I got halfway across, from one side of the altar to the other, when I realised I could go no further because this rather grand looking chair (more like a throne really) was actually chained and could go no further.  By now I was resembling Frank Spencer in ‘Some Mothers do have’em’!  So, I retreated back to the chair’s original position and there with my head down until called upon to preach.

The Rector was very understanding afterwards – apologized that someone had removed the original chair and commented, with a glint in his eye, that the one I actually sat on was usually reserved for the bishop!

Since then my ecumenical encounters have been rather tame by comparison.

There are, I believe, lots of advantages in serving alongside other Christians and some of our best work is done when we do it together.

On Tuesday at AFC we had a great talk about Bible Society which is supported, just like Christian Aid, by all the mainline churches in Britain. And locally we have a great project called ‘Open the Book’ which works in schools taking assemblies in a fun way – and is ‘staffed’ by volunteers from a variety of Amersham churches.

So, I’m looking forward to Sunday because I believe in ecumenism – but I will be careful as to which chair I sit in!
at January 18, 2018 No comments: 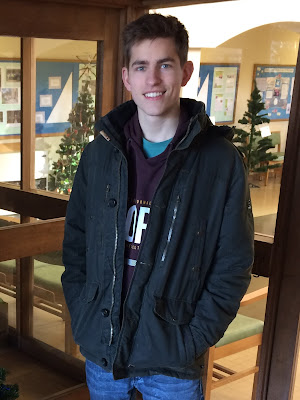 Hauke, from Germany, is our Time for God volunteer and is serving at Amersham Free Church for this academic year.  We’ve loved getting to know him over recent months and most weeks he takes part in Morning Service, anything from leading the Opening Responses and setting up the Data Projector to playing the piano during the offering.  Last week he did something different – he wrote the opening prayer of adoration and confession – something he’d never done before and in English too!

His prayer comes across with a certain freshness and deep sincerity – so I thought it would be great to have it on the Blog this week!

Prayer of Confession
God, you know us and our sins, our way of life and our objectives.
In our daily life we are often only thinking about our own goals and wishes, and tend to forget our surroundings.
Please help us to see the needs of others around us and give us strength to help them.

Popped into Tesco over the weekend and almost the first shelf I bumped into was labelled ‘Christmas Clearance’.

Items, highly prized and priced just days ago, were now on offer at knock down prices!  Somehow the crackers and chocolate Santas loose their sparkle remarkably quickly after the 25th.

Then on New Year’s Day, in search of milk, I breeze into Waitrose and find a whole shelf of Easter Bunnies!  All felt a bit like ‘indecent haste’!


In 1973, as a twelve-year-old, the band Wizzard had a hit entitled ‘I wish it could be Christmas everyday’ – now that’s not a sentiment I readily ascribe to, yet I fully understand frustration of the Narnian creatures in C.S.Lewis’ The Lion, The Witch and The Wardrobe who bemoan the fact that, under the rule of the white witch, it was ‘always winter yet never Christmas’.

So, is Christmas date sensitive?  Does it have a ‘best before’ stamp?!

I think one of the deepest ideas Christians celebrate in this Feast of Christ’s Birth is that of the transformative Presence of God – that ‘alongsideness’ which is encapsulated in the name Immanuel -God is with us.

This week folk will have returned to work, getting back into routine, having operations, facing challenges-  and God is with us as much now, at the beginning of 2018 as when we sang Silent Night in church on Christmas Eve.

We may soon be boxing up the decorations and recycling the cards, yet the essence of Christmas – that presence of love and light is surely to be welcomed and cherished every day of the year.