Ministry - from the other side

A few years back we exchanged manses with the minister of a church just outside of Washington D.C.  During those three weeks we got to know a few people in his church and I had the privilege of preaching there on our two middle Sundays. Since then I've followed this congregation from a distance by now and then browsing their website. My minister friend has now moved on to another appointment so this suburban Washington church has been in Pastoral Vacancy for about eighteen months - until last week when they announced a new minister who will be coming up to them from Texas.  What surprised me was the fact that during this settlement process they had received no less than two hundred applications for this post!

Although I've caused a few ministerial vacancies I've never actually lived through one - but all that is about to change.  Next week I attend my first meeting at a neighbouring church as their Moderator.  That is - they are in Vacancy (we used to call it 'Interregnum - meaning 'between reigns' - a term which is now going out of favour a little bit!) and I have been asked to support them through this process.  I've already seen the excellent work they have done on their Church Profile and eventually I'll travel with them as they select potential candidates, interview and consider the possibility of calling one of them to be their next minister.

I suspect church life looks different depending where you sit (metaphorically) within the life of that congregation.  For the first time I'll see the settlement process from 'the other side' - instead of waiting for the phone call from the church secretary to tell me the result of the appointment election, I'll be waiting with the church secretary to hear whether or not a prospective candidate wishes to accept the pastorate.

Maybe it's always natural to think 'my view' of church is the only one, or the right one - especially so if we put a lot of effort into the life of a local fellowship.  Yet the truth is ours isn't the only viewpoint.  Others will see things differently depending on 'where they sit'.

Listening to one another and respecting each others viewpoints and experiences is a constant challenge to us church folk - one we must never give up on.

I'm looking forward to 'going over to the other side' (!) and walking with this neighbouring church as they look for a new minister - I have a feeling I won't only learn a lot about them and the process, but about myself as well. 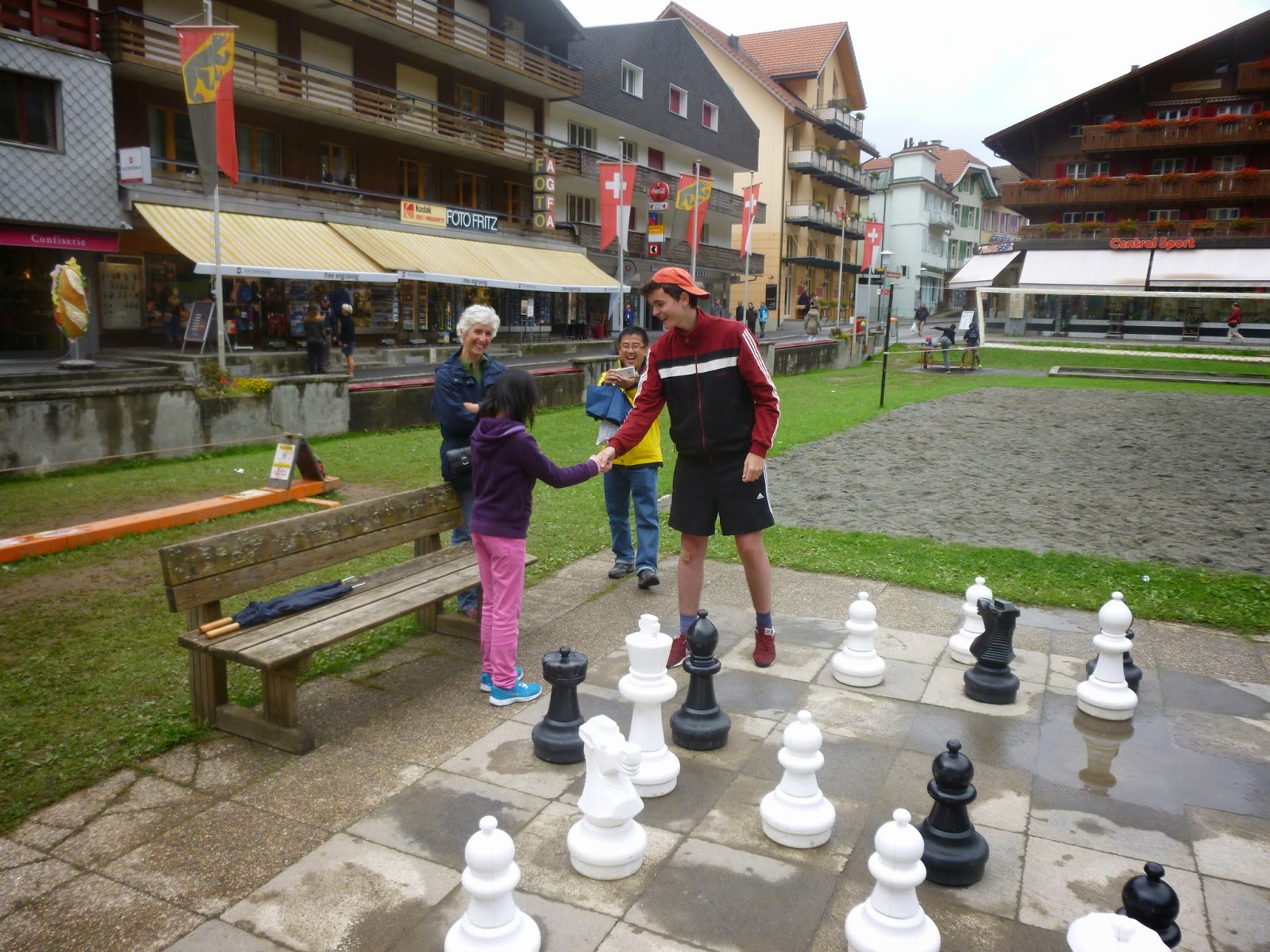 We have recently returned from a great family holiday in the Swiss mountains.  Every day we were thrilled by the stunning scenery of snow capped peaks, rushing waterfalls and sweeping meadows filled with Alpine flowers.  Yet...one of my most precious memories of the time we spent together is of a damp afternoon in the village where we stayed, Wengen, the day our train passes ran out as we tried to fill a few hours playing chess.

Chess became something of a feature of our time together - we played it at night in semi-serious family tournaments and there was a giant set next to the table tennis and volleyball in the centre of the village.  Last Friday we played it in full public view and soon a little crowd gathered.  Our family game came to an abrupt and humiliating end (it was parents verses teenagers - so you can guess which side was triumphant!)  As we went to walk away a Chinese girl, just eight years of age, indicated that she might like a game - so our youngest son, all six foot three inches of him, took her on!

For the next hour they thrashed it out - each time she moved a piece she made the most beautiful smile to her dotting dad as if to gain his approval and encouragement!  Although nine years separated them the truth was they were actually quite evenly matched and it was a great game.

Slowly other people gathered to watch so that by the end the crowd consisted of English, Chinese, Arab, Swiss and German onlookers - a truly wonderful international moment.

We didn't speak each others language - the only language being used was the game of chess and many smiles.  It was, in my view, a very beautiful moment - binding people together in friendly, peaceful competition - and a spirit of great fun and interaction.

At the end our two competitors (and the bidding of both their proud fathers!) shook hands and stood for a photo.  So on either side of the globe this moment of international chess is commemorated in a couple of photo albums!

We saw many wonderful things in Switzerland over those ten days but nothing inspired me more than watching these two young people engage together in a game of chess - something so small yet containing the essence of all we long for: a world in which different cultures and traditions live side by side in mutual respect, peace and friendship.

With all good wishes,